By any measure, Larry Brilliant has had a remarkable life.

In 1978, he and his wife Girija brought together an astonishingly diverse collection of doctors, epidemiologists, academics, spiritual figures and one beanie-wearing clown to help found the Seva Foundation, which has helped restore the sight of nearly 4 million people.

Although for many that accomplishment might have been enough for a lifetime, Larry Brilliant has had a brilliant career before and after Seva.

His life before Seva is at the heart of his memoir "Sometimes Brilliant: The Impossible Adventure of a Spiritual Seeker and Visionary Physician Who Helped Conquer the Worst Disease in History," which is being published today (10/11/16) by HarperOne. (available on Amazon or at your local bookstore).

One of his first intersections with history came while doing his medical internship in San Francisco in the late 1960s. The great San Francisco Chronicle columnist Herb Caen put out a call for doctors to go to Alcatraz to help treat Native Americans who had occupied the historic rock.

So Larry, who was often called the "Hippie Doctor," raised his hand and went to Alcatraz, where there was no electricity, no water, and little food or medicine. He ended up delivering a baby on the island, which made front page news in the San Francisco newspapers. It was good training for his later work in challenging circumstances. 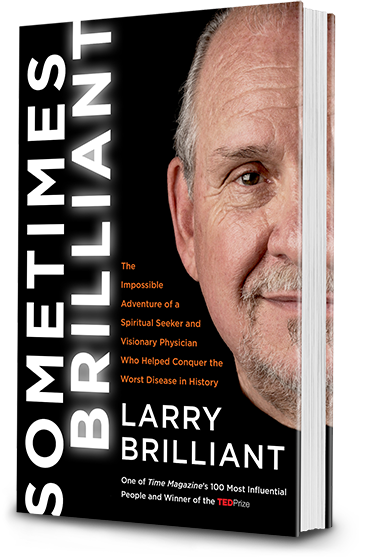 Flash forward a few years and Larry and Girija Brilliant are on their way to a Himalayan ashram to visit her spiritual guru, the great Nareem Karoli Baba, who opened Larry's mind and heart to a spiritual path. He became Larry's spiritual guru as well, calling him "Doctor America." It would be Maharaji's vision of Doctor America's future that thrust him into the assignment of helping eradicate smallpox in India.

After turning him away repeatedly, the World Health Organization in New Delhi finally accepted Larry into its ranks. He joined what many at the time viewed as a quixotic endeavor to eradicate the 10,000-year-old disease that killed more than a billion people in the 20th Century, and countless others before that.

Along the way, he met and became friends with a fascinating array of disease fighters including the formidable Swiss-French medical virologist and epidemiologist Dr. Nicole Grasset who became his boss and years later would help shape the mission of Seva.

"Sometimes Brilliant" is a riveting account of the smallpox eradication efforts and a spiritual meditation on the often heartbreaking dilemma of being both a physician charged with easing individual suffering and an epidemiologist trying to eliminate a deadly disease.

Along the way, he also helped found of one of the first digital social networks, The Well, won the first TED prize for his talk on eradicating pandemics, and is now chairman of the Skoll Global Threats Fund, with its mission of confronting threats that imperil humanity.

With each step, Larry Brilliant's extraordinary journey has been a testament to faith, love, service, and what it means to engage with the most important questions of our time in pursuit of a better world.