Have you ever wondered about the power of your donation and the difference it made in the life of someone who was needlessly blind or visually impaired?

The story starts in 1996, when long-time supporters Marissa and David Troxell made their first gift to Seva and continues to the present, with one little girl named Rattana and her entire school’s journey to clear vision.

Several months out of the year, David and Marissa volunteer to teach English at Rattana’s school. Students who attend this school come from impoverished homes. These children are not able to attend regular public school because their families cannot afford the fees to purchase school uniforms. The cost to attend this special school is covered through grants and donations. Instead of working their childhoods away in the fields, these children are given the greatest gift they can imagine — an education.

Like many students who attend her school, Rattana comes from a broken home. Her parents divorced and separately moved to Thailand to work as unskilled laborers. Because wages for unskilled labor are so low, neither one is able to send money home. Rattana and her four siblings now live with their- grandparents, who struggle to make ends meet.

When Rattana was younger, she had a traumatic accident that injured one of her eyes. The accident left her with poor vision and deviation of the injured eye. The injury affected both her vision and her self-esteem. She looked different than the other children and was teased because of her crossed eye. She was unable to play sports at school because she lacked the necessary hand-eye coordination. Reading was challenging and she struggled in class because she couldn’t see the blackboard.

Marissa was immediately drawn to Rattana when the two met. Marissa had been born with a similar eye condition to the one that afflicted Rattana. Unlike Rattana, Marissa’s parents could afford surgery and had her eyes corrected when she was two and a half. Marissa knew she had to help Rattana receive surgery, too.

Because she had been a long-time donor to Seva, Marissa knew what to do. She contacted the Seva Berkeley office, who connected her to the Seva Cambodia team and arranged for Rattana to get the eye care she needed at one of Seva’s nearby partner hospitals.

After the surgery, Marissa realized that there might be other children at Rattana’s school with eye problems. 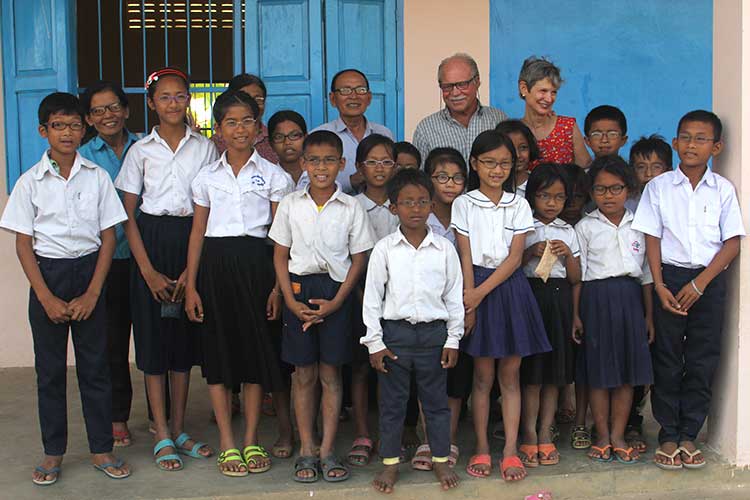 "The ah-ha moment came when we noticed, in looking out over the masses of faces in our classrooms, that there was but one pair of glasses in the entire school (in addition to the ones Rattana received after her surgery) and those belonged to a student whose father was one of the teachers at the school," said Marissa. "We realized that there were likely many students at the school who could not even see the new white boards."

Again, Marissa contacted Seva and arranged for the Seva Cambodia outreach team to visit the school. Through the school-screening program supported by Seva donors, all 350 students and staff received eye exams. Seventeen children and four teachers were diagnosed with visual impairment.

The next serendipitous intersection of this story comes from one of Seva’s Gift in-Kind donors, MODO Eyewear. They design, manufacture, and distribute high quality designer eyewear and are a leader in producing sustainable frames.

MODO sent a supply of colorful pediatric frames to Seva, which were hand carried to Cambodia by Seva staff prior to the school screening. The 17 students excitedly chose from the stylish selection of frames. Two days later, prescriptions filled, the students and teachers proudly put on their beautiful new glasses — some of them putting on glasses for the first time ever in their lives.

"When we were leaving the school after the eye exams and Rattana was wearing her new pretty pink glasses, she took my hand and beamed up at me and said ‘Thank you!’’ shared Marissa. "Rattana knew her life had changed!" 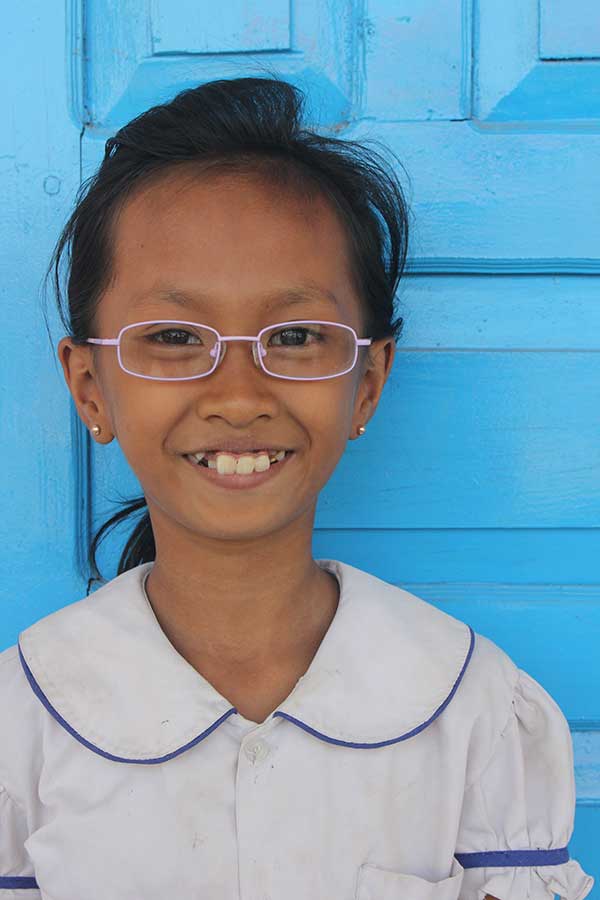 Top: The lives of these Cambodian students were changed for the better with new eyeglasses.
Above: Rattana wearing her new glasses.
Group Photo: David and Marissa with the students and teachers that received their first eyeglasses.

"The ah-ha moment came when we noticed, in looking out over the masses of faces in our classrooms, that there was but one pair of glasses in the entire school."