Donor Spotlight: Nikolas Toocheck
"You don't have to be big to make a difference!" 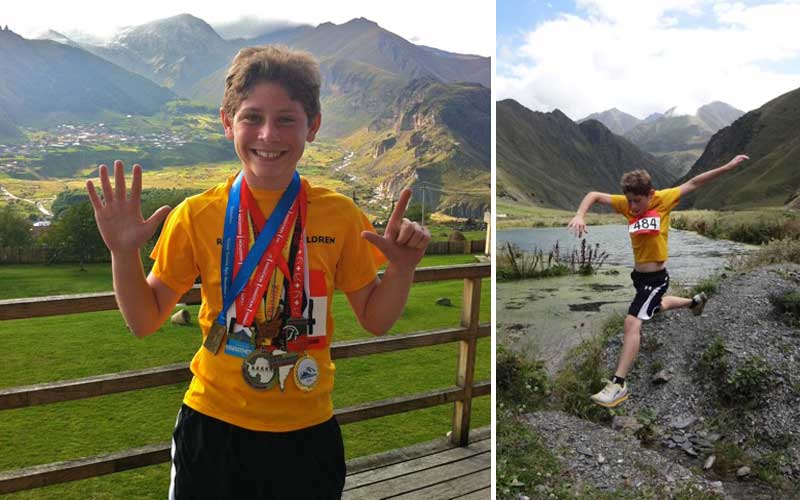 14-year-old Nikolas Toocheck came up with his very own philanthropic campaign called "Running the World for Children."

Nikolas's first incredible goal was to raise funds for charity by running a marathon on all seven continents. This student from Pennsylvania quickly became the youngest person to achieve such a feat. As if that couldn't be topped, this budding philanthropist has now just completed his latest goal to run a marathon in all 50 U.S. States. Nikolas's campaign focused on raising awareness and financial support for Seva's pediatric programs to prevent blindness and restore sight to children in need.

So what's motivating young Nikolas to take on these incredible feats? He proudly answers that his father Daniel is his inspiration.

His father is an eye doctor, who regularly travels the world volunteering for organizations like Seva and providing underserved communities with vital sight-saving eye care.

Daniel runs each marathon with Nikolas, every step of the way, describing his son as a "high energy individual," who truly is the "young Forrest Gump."

As active as he is, Nikolas still finds time to be a kid, especially on the marathon course. Enjoying both road and trail running, Nikolas often strays off the beaten path when he's training - literally! He can't run in a straight line, even when there is some form of pathway. If you're behind him, you can watch him kicking rocks and grass, jumping in the occasional stream, and in winter, climbing up the largest snow mount. His favorite running weather are the extremes. According to Nikolas, the worse the weather, the more fun it is. He can't wait for his chance to run in hail but his mother has informed him that he'll be wearing a helmet when the time comes!

Nikolas doesn't just race for the love of it, he runs to raise funds to help others. Nikolas explains that his catchphrase is, "you don't have to be big to make a difference!"

Seva's Director of Development, Julie Nestingen, notes, "It is wonderful to see the focus and commitment Nikolas has for making a difference in the world and he sets a beautiful example for other young people to realize that they 'don't have to be big to make a difference.' Seva is honored to have this level of commitment from our supporters, regardless of age. Nikolas is breaking records at many levels."

In addition to breaking records, Nikolas has been receiving distinguished honors for his volunteer efforts, recently being named a Prudential Spirit of Community Award Honoree and Jefferson Awards Foundation GlobeChanger.

An estimated 500,000 children become blind each year. With proper access to eye care, an astounding 80% of overall visual impairment can be prevented or cured. Campaigns like Nikolas's are helping Seva to build sustainable pediatric eye care programs that are saving the eyesight of children in need around the globe.