It started as a typical hot, dusty morning in Melchor de Mencos, a small town in the Peten region of Guatemala near the border of Belize. As the morning progressed, the town became crowded with people streaming in from miles around. Some came by bus, others on motorcycles, bicycles and on foot. Filled with hope, they had come to attend a Seva-sponsored outreach screening camp organized by our longtime local partner Visualiza.

Word traveled quickly that the outreach team had returned, offering free care to anyone with an eye problem. Over two days, 700 people waited patiently to have their eyes examined at the temporary clinic that had been set up in the center of town.

The first morning, the line spilled out of the front door. Many sought refuge from the unrelenting sun beneath umbrellas. A nervous mother brought her nine-year-old daughter Wendy, hoping the doctors could restore sight to her blind eye. Five years ago, Wendy had lost vision in her eye after accidentally being bumped in the head while playing with friends.

Making their way through the series of exam stations, Wendy and her mother learned that Visualiza's ophthalmologists might be able to help her see again by operating on her eye. The doctors informed them that a cataract that had formed after the injury was causing her vision loss.

Wendy was scheduled for surgery, which would take place the next morning at Visualiza's outreach clinic. Transportation was arranged for Wendy and her mother, along with all of the other patients who had been identified as requiring sight-restoring surgery. Of the 25 patients who boarded the clinic's bus, Wendy was the only child.

The next morning, dressed in a hospital gown, Wendy bravely sat with the adult patients as she waited to be called in for surgery.

Twenty-four hours later, after a successful surgery, the eye patch was removed and Wendy slowly opened her eyes. For the first few days, Wendy's vision was a little blurry. But after being fitted with a pair of prescription glasses, Wendy's follow-up exam showed that her vision had come back nicely and the surgery had been a great success! With vision restored, Wendy can now see clearly and is excited to be returning to school. Thanks to Seva donors, Wendy's future is bright and full of potential. 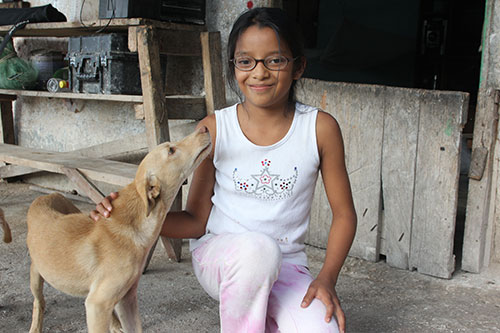 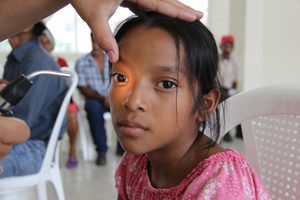