The first was that the cause of her five years of blindness was cataract, the most common cause of blindness worldwide. The second thing she learned was her condition was treatable, and within 48 hours her sight would be restored. There in the doctor’s makeshift examination room in a village in rural Tanzania, unable to see her hands in front of her face – let alone me or the ophthalmologist who was telling her the good news – Edina smiled.

Edina first began having trouble with her vision in 2012. She and her husband, Mahona, owned a small restaurant in a village in central Tanzania and also worked in the fields together to support their family.

Initially, it was the bright sunlight that irritated Edina’s eyes, rendering her unable to help Mahona work in the fields. Gradually, her vision clouded over and she began having accidents at the family restaurant, tripping, spilling food and dropping tea on the floor. She was just forty years old when the family decided to close the restaurant because she was no longer able to work.

Edina’s family members took turns staying home with her to help her eat and walk to the toilet. Her son, Emmanuel, missed days of school to stay by his mother’s side. Her husband worked in the fields, took care of the children and cooked for the family. Though still strong in every other way, Edina was crippled by her lack of eyesight.

After years of fruitlessly searching for medicine or treatment for his wife, Mahona received a phone call from the village chairperson; in just a few weeks there would be an eye screening camp at the Igombwe Dispensary, several kilometers from where they lived.


Along with hundreds of other people from nearby communities, Edina traveled to the screening camp to have her vision checked. Like a dozen others who were identified with cataract, Edina was helped into a van and transported to Singida Regional Hospital. There, the local ophthalmologist, Dr. Kuzenza, operated to restore their sight.

The morning after her surgery, Edina’s bandages were removed as she sat alongside the other patients who had received surgery for cataract. There were a few minutes of blurry vision as her newly operated eye adjusted to the light. Then the shapes around her resolved into faces and she was seeing clearly for the first time in years!

She began talking and laughing with the other patients, all immersed in the simple joy of being able to see the faces of the people they were speaking with. Then, testing the strength of her vision, she looked further and saw her husband standing across the room, smiling at her.

Through Seva’s local partner in Tanzania, the Kilimanjaro Centre for Community Ophthalmology (KCCO), Seva has been supporting Singida Regional Hospital’s Eye Department since 2015. Before this partnership, the team was sometimes unable to operate on patients for four or five months at a time because they had no access to the necessary consumables for surgery. But since starting to work with KCCO and Seva, Dr. Kuzenza’s team is doing one outreach trip per week and nearly 1,000 cataract surgeries each year in a region where this care would be otherwise nearly impossible to access.

Without the support of Seva through KCCO and the dedication of local eye care professionals like those at Singida Regional Hospital, the surgeries and outreach that allowed Edina and so many others to receive the gift of restored sight would not be possible.

Edina Mboje’s life, and the lives of those around her, are transformed forever. 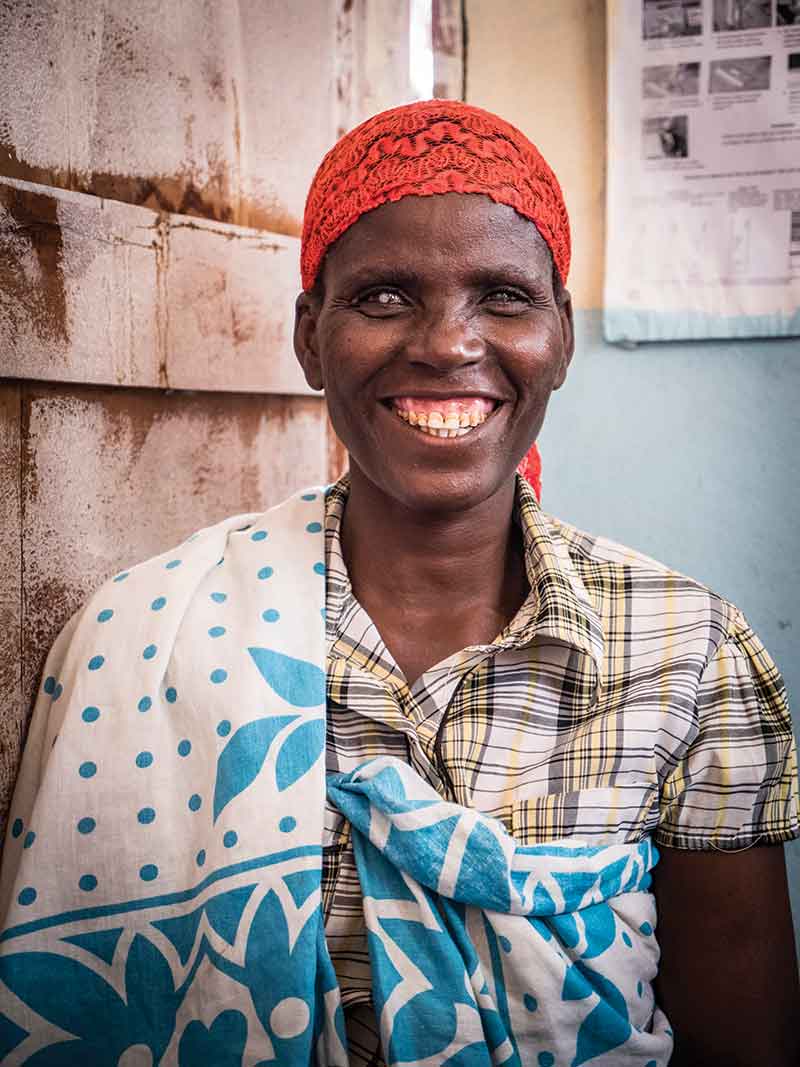 The last time I saw Edina, she was waving goodbye from across a river, accompanied by her husband and son as they traveled home from the Igombwe Dispensary, where the hospital’s outreach van had dropped them off the day after her surgery. She was full of vitality and moving surely into a brighter future – a future in which Edina is no longer confined to the house, no longer dependent on family members to help her perform the most basic tasks. A future in which her son returns full-time to school, Edina returns to proudly help her husband in the fields and the family reopens their restaurant business. A future in which Edina Mboje’s life, and the lives of those around her, are transformed forever.

Support Seva's sight-restoring programs in Tanzania and around the world with your donation today.